While the central region of North Carolina known as the Sandhills had been settled by Highland Scots since the early 1700s, the area was at first slow to develop. The sandy soil could not produce many crops except the sprawling forests of pine trees, nor was it solid enough to allow easy travel by carriage. With the coming of the railroad in the mid-nineteenth century, however, everything changed. 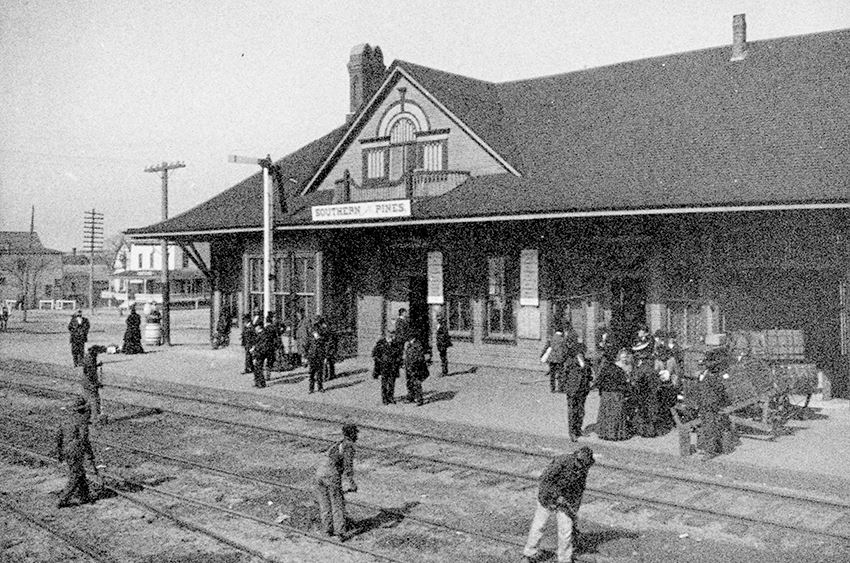 Suddenly, the pine trees became a cash crop that could be easily harvested and shipped away as lumber and the people traveling through the area on the railroad between the North and Florida discovered Southern Pines as a convenient stopping point.

In 1884, John T. Patrick bought 675 acres of land for a grand total of $1,265, and began forming the town of Southern Pines. The very sandy soil that had hindered the area's development for so long was in fact one of the causes of the Sandhills' pleasant climate, which is drier and milder than the rest of the surrounding state. Patrick's dream for the town – for it to be a health resort – relied on this lovely weather. Even though Patrick's dream was never fully realized, the health aspect was the impetus for the early development of the town, especially as Patrick advertised the area's fresh pine air had medicinal qualities to cure Tuberculosis, which was a widespread concern in 19th century America. Southern Pines quickly grew into a vibrant and prosperous community and became a favorite winter resort, especially for those seeking to escape the harsh weather of the north.

Dr. Lawson Andrew Scruggs took note of Patrick's advertisements. Dr. Scruggs was the first African American to pass the North Carolina medical exam and was practicing in Raleigh at the time. Dr. Scruggs was searching for a 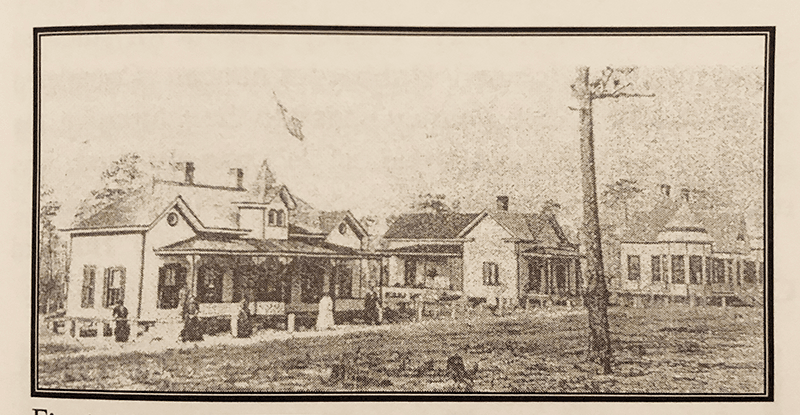 location to build a sanitarium where African Americans could stay while being treated for Tuberculosis, as no such facility existed. He purchased land on New York Avenue from John Patrick and opened the Pickford Sanitarium (pictured at right in 1900) in September 1897, named after Charles Pickford a businessman who helped fund Dr. Scruggs' education and finance some of the construction. The Pickford Sanitarium operated for approximately 20 years before Scruggs and his trustees sold the property in 1912. Under stress from a lack of funding and resources for the facility, Dr. Scruggs's health was declining and he died in 1914 in Raleigh.

The North Carolina General Assembly officially incorporated the Town of Southern Pines on March 7, 1887 and named C.W. Shaw as the first Mayor. At the time of its incorporation, Southern Pines was governed by one mayor, five commissioners, and a town marshal. Over time, that evolved and today, the Town Council includes the mayor plus four councilmembers. A timeline of Southern Pines elected officials from the 1950s to present day is available here.

Two communities by the name of Southern Pines sprouted up and grew in the later 19th and early 20th centuries:

In 1923, West Southern Pines formed as one of the first incorporated African American towns in North Carolina with its own mayor, council, and municipal services. West Southern Pines operated independently until it was annexed into the larger Southern Pines municipality in 1931, bringing with it a rich cultural heritage that we continue to recognize and honor today. The unified town has flourished over the years, surviving world wars, the Depression, and changing economies.

In 1977, Emanuel Douglass (pictured at right) was elected as the first African American Mayor of Southern Pines. Mayor Douglass arrived in Southern Pines in 1934 with his uncle, who was the principal of the school located in the West Southern Pines community.

In a 1982 interview, which was part of the Southern Oral History Program at the University of North Carolina at Chapel Hill, Mayor Douglass talks about the importance of the West Southern Pines Civic Club, which helped to identify leaders from the West Southern Pines community who could serve on the Town Council and in other capacities. Mayor Douglass shares some of the leadership lessons he gained and the role the Civic Club played in his appointment to the Town Council. Douglass was appointed circa 1970 to serve the remainder of Felton Capel's term after he resigned to serve on a state board. Douglass first served as a Councilmember, then as Mayor Pro-Tem until 1977, when he was elected by the citizens as Mayor. He served in that capacity until 1987, when Alex Bowness became the next Mayor.

"[The West Southern Pines Civic Club] got together and asked me would I consider serving and I told them for the benefit of the club and community, I would serve the balance of the term. They they could look for somebody else. I hadn't planned on staying on. By the end of the term, they decided that they didn't want anybody else. They wanted me to serve so I ran and after I won, I continued to serve. At the present time, I still serve. I have told the club to find another wick to put in the lamp because any wick will burn out. I don't want to be a nonfunctional institution of one.

I've found that a lot of white citizens thought well of me too and I'm appreciative. I've told them that I have no rule of thumb other than try to wear the moccasin that we put on the other person's foot. If it squeezes my toes, I know it squeezes theirs. That's my rule of thumb."

The Boyd family has resided in Southern Pines since the beginning of the 20th century. The first James Boyd, a successful businessman in the steel and railroad industry, made his home in Southern Pines and established the 1,200-acre Weymouth estate. Boyd named his estate for its resemblance to Weymouth, England and opened it to both townsfolk and tourists to enjoy as a natural park. After World War I, the estate was passed to his grandsons, James and Jackson, who, in 1914, founded the Moore County Hounds, which is still active today on part of the original estate. 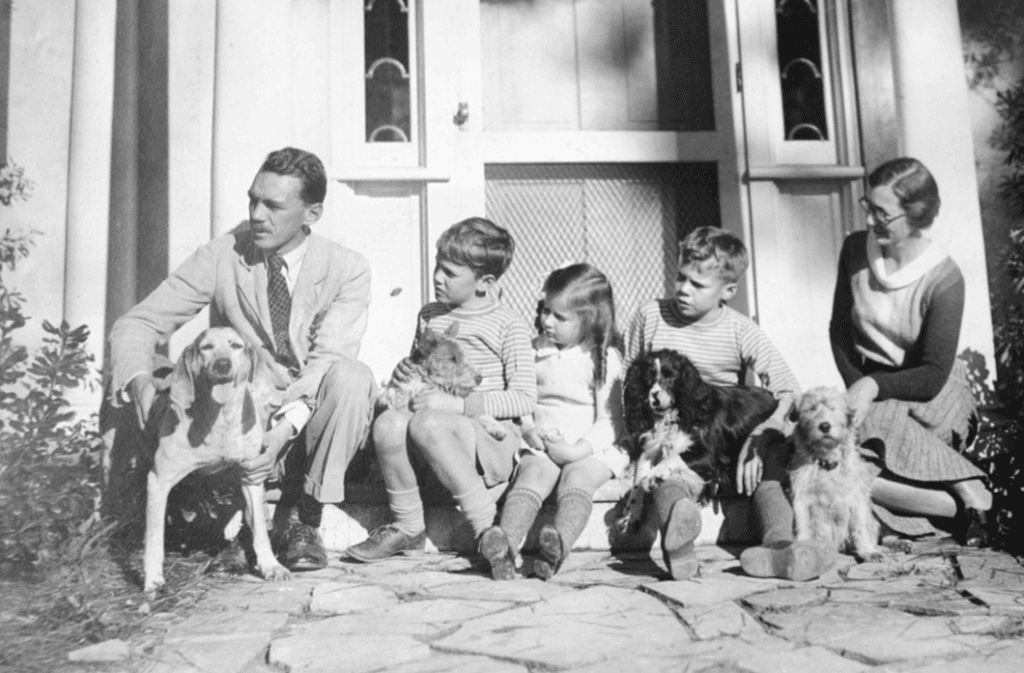 This younger James Boyd (pictured at left with his wife Katherine, children, and the family's hounds) began his life in Southern Pines on his part of the estate, building what would become known as the Weymouth House. In his new home, James wrote his first and most well-known novel, Drums (1925). While Boyd lived there, the Weymouth House became a social center for other great writers, including F. Scott Fitzgerald, Thomas Wolfe, and Paul Green, beginning a literary tradition in Southern Pines that remains a core aspect of the town’s heritage today. In fact, Weymouth Center with its beautifully restored house and gardens, is now home to numerous cultural programs, including the North Carolina Literary Hall of Fame. Visitors may tour the grounds daily and the house during limited hours on weekdays.

James and his wife Katherine left a legacy in Southern Pines and Moore County that extended beyond the literary tradition. They were benefactors to the Moore County Hospital, the Southern Pines Library, the Weymouth Woods Nature Preserve, Penick Village, and Sandhills Community College, to name but a few. Their generosity, culture, and commitment to the community played key roles in our town’s growth and success.

We welcome you to visit our many historic sites around town to experience Southern Pines' history first-hand. Find more information about points of interest at the Southern Pines Welcome Center, which hosts a historic photo display of young Southern Pines and offers local maps and brochures. Learn more at the Moore County Historical Association website, or the office in the Shaw House.